Which Common Plastic is Best for Foodservice Drinkware: Tritan vs. SAN vs. PC

As a foodservice operator, you may not have given much thought to which kind of plastic your drinkware is made from. Considering the tight margins in this industry, you've probably focused more on price than anything else. But what if we told you that focusing on the material your plastic drinkware is made from can have a bigger impact on your overall bottom line than just looking at the price?

It's true. Depending on your operational needs and brand positioning, you may be spending more than you need to on your drinkware. Or you may not be spending very much, but replacing your drinkware more often due to chipping, cracking, or breaking, which costs you more in the long run.

We're going to give you an overview of three different kinds of drinkware plastics - Tritan™, SAN, and PC - to see how they compare in terms of durability, replacement rates, and segment use cases.

About Tritan™, SAN, and PC in Commercial Plastic Drinkware

Each of these plastics are good options and have their place in foodservice. PC (polycarbonate) and SAN (styrene-acrylonitrile) are probably the two most common plastics used in commercial drinkware. Tritan™ brand plastic was developed as an effective, alternative material to glass.

Among these three options, SAN is usually the most economically priced, with PC a bit more expensive. Tritan™, like all premium products, is the most expensive at about 30%-45% more than PC and SAN.

SAN and Tritan™ are BPA-free, but PC cannot be made without it because it's part of the chemical composition. If BPA is a concern for you or your guests, that may take PC out of the running as a plastic drinkware option.

Similarities Between Tritan™, SAN, and PC Plastics for Foodservice

On the surface, these three materials have quite a bit in common. All three have:

From this vantage point, you could say they all perform the same job function - holding beverages - so why not go with the least expensive option? That's a valid point. However, by digging just a little deeper, you'll see that each of these materials has nuanced performance differences that may influence which material is best for your brand.

Durability Differences Between Tritan™, SAN, and PC Plastics for Foodservice

All three materials are durable, but in different ways. Eastman-Kodak conducted a lengthy study testing several performance functions of these materials. We're going to look at two common occurrences in commercial foodservice that can have the most impact on durability: dishwashing, and dropping/striking drinkware.

Commercial Dishwasher Performance of Tritan™ vs. SAN vs. PC

In the dishwashing portion of Eastman-Kodak's study, they washed all three plastics in a commercial dishwasher 1,000 times. Each material was inspected for clarity and structural integrity (chipping, cracking, etc.) after 1, 100, 250, 500, 750, and 1,000 wash cycles.

Both Tritan™ and SAN withstood washing in a commercial dishwasher for 1,000 cycles. It's likely each plastic would continue to perform well after 1,000 washes, but the test didn't go any further. PC, on the other hand, passed its first wash, but failed after the next benchmark of only 100 washes because it showed signs of cracking.

Key Takeaway:  In high-volume foodservice where frequent dishwashing is common, you may need to replace PC drinkware 10x more often than SAN or Tritan™. Even if you got the deal of a lifetime on PC drinkware pricing, you'd still be out money due to high replacement rates.

Not finding the answers you want? Leave a comment telling us what we're missing and we'll cover it for you.

Drop Impact Performance of Tritan™ vs. SAN vs. PC

This is where the tables turn a bit for SAN and PC. The Eastman-Kodak study added a layer to their dishwashing test and included dropping drinkware up to 5 times between each round of wash cycles (using the same intervals as above).

Tritan™ was the clear winner, passing every inspection of the test. It showed zero signs of chipping, breaking, or cracking, and likely could have gone further had the test not ended.

SAN failed the drop impact by chipping on the initial drop. This doesn't necessarily mean that SAN will chip or crack every time it's dropped, just that it's possible.

PC passed the drop impacts, but failed in the dishwasher. The chemical makeup of PC plastic reacts more intensely with the chemicals used in commercial dishwashers than SAN or Tritan™. If it's kept out of the dishwasher, it performs pretty well regarding drop impact damage. But in a high-volume foodservice environment, it's usually not practical to keep your wares away from sanitizers.

Key Takeaway:  Tritan™ and PC passed the drop impact test with flying colors. However, in a real-world, high-volume application where drinkware would be frequently washed, it doesn't matter how well PC withstands drop impacts because it can crack after only 100 wash cycles.  If you're a high-volume foodservice operation, however, you may be better off with Tritan™ or SAN because they can withstand dishwashing better than PC.

Clarity of Tritan™ vs. SAN vs. PC in Commercial Drinkware

All three plastics have excellent clarity. Overall, PC and SAN have similar levels of clarity. Depending on the tier of drinkware and the raw materials used in the manufacturing process, though, clarity can vary slightly and SAN may exhibit a faint, yellow tint. Between the two materials, clarity differences are not significant.

Tritan™ consistently looks the most like glass, due in part to its superior clarity, but also because of its design capabilities.

Design Capabilities of Tritan™, SAN, and PC in Commercial Drinkware

Because PC and Tritan™ are more flexible plastics, they lend themselves better to specialty barware than SAN. Barware, like wine glasses, champagne flutes, etc., often feature curves. The flexibility of Tritan™ and PC accommodate this design element very well. Most operators looking for plastic barware want a product that looks like glass. Tritan™ and PC materials do the best job of the three plastics discussed here.

Because barware isn't always washed in a commercial dishwasher or necessarily used in high-volume, PC is a good choice. But if you have the budget and you're in the market for a premium item, you'll probably look to Tritan™.

Best Uses by Segment for Tritan™, PC, and SAN

These high-volume foodservice segments typically benefit the most from SAN because it has excellent endurance when it comes to repeated dishwashing, and it's less expensive than Tritan™.

Take control of your reading experience. Leave a comment below telling us what interests you and we'll write about it!

Barware is often needed in these foodservice segments, so PC is a great choice. It will be exposed to limited dishwashing, does a great job imitating glass barware, and of course, is less expensive than Tritan™.

Service environments where guests expect a little more pampering than in the segments above may benefit the most from Tritan™ because it: If you've made it to this point in the article, you probably already consider plastic drinkware to be a better choice for your foodservice operation than glass. In case you're still trying to decide, we have a couple stats you'll want to remember before moving forward with your investment:

If you'd like to read more about the operational benefits of using plastic vs. glass drinkware in a foodservice environment, check out ""Plastic vs. Glass Drinkware for Commercial Foodservice: Which is Better?"

What Determines the Cost for Melamine Bowls? Factors and Price Ranges
Most Durable Dinnerware for Casual or Fast-Casual Restaurant: Disposable vs Melamine vs China
10 Creative Pizza Plating Ideas
What is the Difference Between Commercial Grade and Retail Melamine Dinnerware? 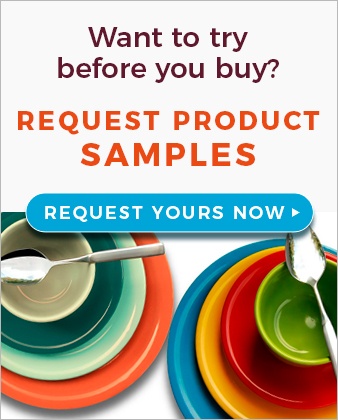